We’re back in the world of Guernsey folklore for this post, featuring epic supernatural battles from medieval times.

Big battle scenes are always complicated – getting a balance between a pleasing, readable image and the chaos of violence requires a fair bit of planning. To add to the difficulty there were loads of historically accurate details to include, such as armour, coats of arms, etc.

The legend tells of a plucky enclave of English islanders who were attacked by elves and thoroughly trounced. It turned out that their attackers were actually French, but the defeated soldiers told everyone they had supernatural powers in an attempt to appear less feeble.

Here’s how the painting developed…

…from the first scribbled layout, to a tonal rough (which was found to be useless as I did the flags black by mistake – they were supposed to be yellow) to a more finished pencil drawing. Later I had to add a bit more action to the bottom of the picture as it was deficient in the height department.

Once the painting was finished (pen and ink and watercolour), there was a request to alter the French/Elves’ hair to brown. Terrified of making a mess on the actual painting, I did that digitally, as it had a knock-on effect to rest of the image. The tonal balance was thrown out of kilter so I had to darken and lighten other parts to make it work better.

Next up, a valiant monk sees off a pesky devil… 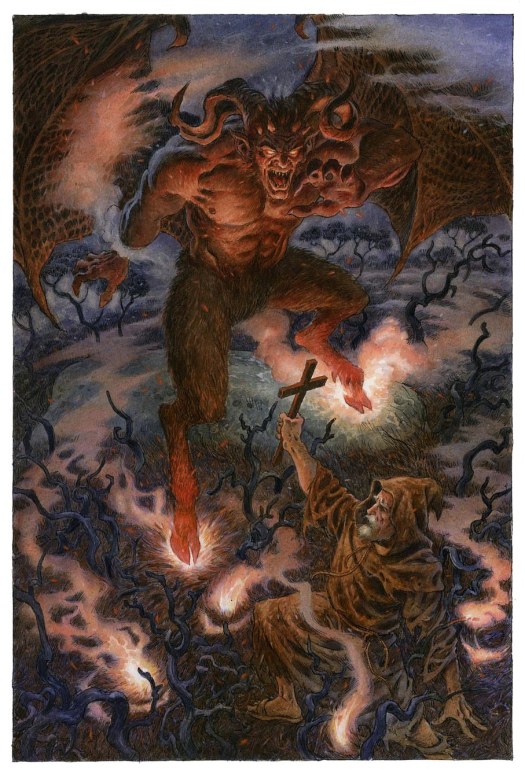 On the coast lies a large granite boulder named La Pied au Boef. It has a hoof-shaped hole in it, said to be the last mark left by the devil as he legged it having been giving a severe ticking-off, Christian-style. This was one of the easier pictures in the series to do; the only time I got into difficulty was with the colour. It’s a little hard to see from this jpeg, but the painting is particularly speckly as I used my trusted technique of splattering watercolour using a toothbrush to adjust large parts of the image. I could then lift paint off with a cotton bud to get more contrast in.

Not much in the way of development for this one – I went straight from this first rough to penciling directly onto the board, aided by a handy bit of posing from Jason of England as the devil and me in a bath robe as the monk. 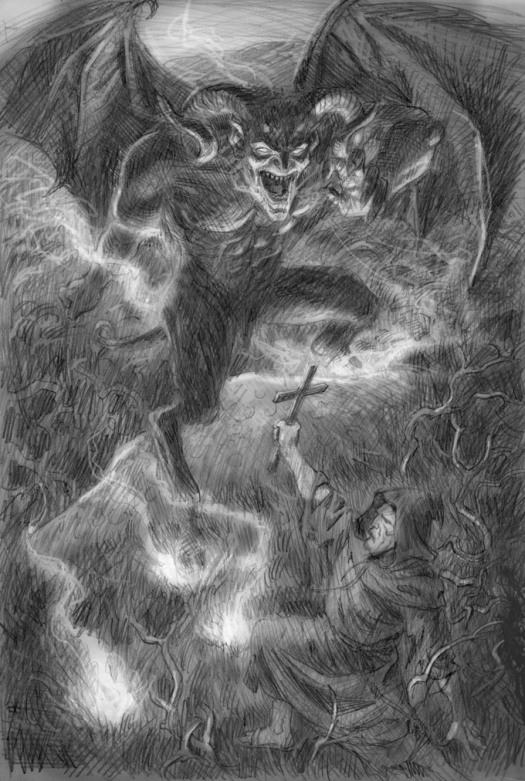 To finish things off, slightly off-topic, here’s a demonic hound – one of the fifteen pencil drawings I made for the project. 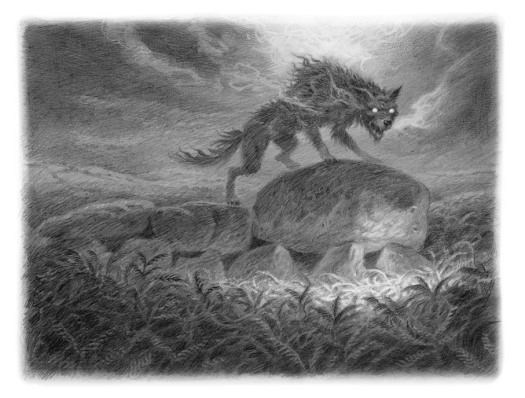