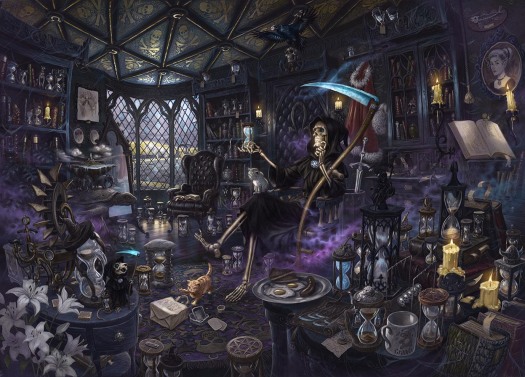 Here’s another terminally frustrating puzzle from Terry Pratchett’s Discworld Emporium. Despite being an entity most people would choose to avoid, Death remains a very popular character and so I was commissioned to bring Him to life in jigsaw form.

Rather like the previous Library puzzle, Death’s home exists in a place where time and space are a bit… bendy. This entails all sorts of perspective-based challenges for the unsuspecting illustrator. Here are some of the stages, from initial concept to workings-out and then a GIF to show how the painting was constructed. 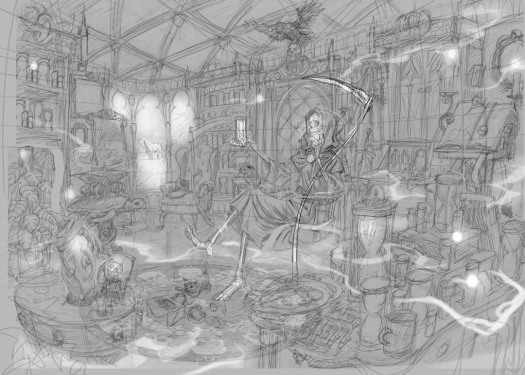 I hope that GIF works – I made it late on Sunday assisted by a nice bottle of Malbec so if it displays on your chosen digital content provider, I will be a surprised yet happy bunny.  I’m aiming to show that the picture was built in layers so I could move things around if needed (it was needed) ensuring that every piece of the jigsaw had something of interest whilst making a satisfying picture. It’s a tonal (greyscale) study that I would later paint over in digital colour once everything was deemed tickety-boo.

Here’s the box cover – after all that eye boggling warped perspective it was good to indulge in some flamboyant Art Nouveau-flavoured morbidness. 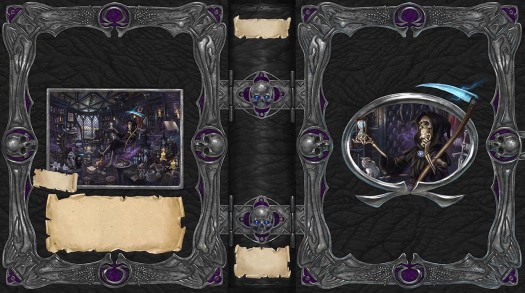 Death’s Study is available from the Discworld Emporium.

Talking of Pratchett-based endeavours, Neil Gaiman was recently in the UK overseeing the production of the Good Omens TV series. Here he is at the launch of my recent book with Janina Ramirez, Riddle of the Runes.

As this post is all about Death, it occurred to me that if I got run over by a tractor or squished by a falling tree (both eminently likely occurences) this photo would be apt as Neil was the first writer I illustrated professionally and (should an unfortunate event befall in the next few weeks) Janina would be the last…

2 Replies to “Death, The Undiscovered Study”